In a highly anticipated moment for Marvel and Fawad Khan fans, the actor finally made his appearance in the latest episode of the series. Khan paired up with Mehwish Hayat to play the characters of Kamala Khan’s familial ancestors, and viewers absolutely cannot get enough of it.

From talking about how good-looking he looked, to how he brought his A-game with his acting, his performance was appreciated globally on Twitter. Some people had reactions that were borderline hilarious.

To be fair, I too would fall pregnant if Fawad Khan recited poetry to me.

me every time fawad khan was on screen #msmarvel pic.twitter.com/PSFgyHoDM9

While some fawned over Hayat and Khan’s chemistry.

Of course, his good looks topped the chatter.

fawad khan had no business looking THIS fine in adhm pic.twitter.com/P0CyDXcxSo

six years since his last role and Fawad Khan is still fine as fuck #MsMarvel pic.twitter.com/8RrnmO1yi1

All in all, Khan continues to win hearts with his performances. Have you gotten a chance to see his appearance in Ms. Marvel? What did you think of it? Admin - January 14, 2018
0
Janaan and Parchi director Azfar Jafri is set to kick off his first project of 2018 with Armeena Rana Khan and Mikaal Zulfiqar playing... 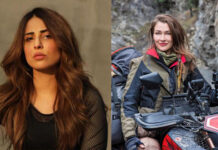