If you’re anything like us, you must be majorly waiting for all the film releases next year. And with Nabeel Qureshi and Fizza Ali Meerza releasing not one but two films in 2020, the excitement level is way off the charts.

The duo earlier announced that the films will be named Quaid-e-Azam Zindabad and Fat Man, leaving everyone to speculate over the casting. And now, we have found out that actor Fahad Mustafa will be taking over the lead role in the former!

READ: Nabeel-Fizza to release Quaid-e-Azam Zindabad and Fat Man in 2020

The film is said to be an action-comedy of sorts, and like another reunion of Qureshi and Mustafa. The director and actor duo seem to blend well, as Qureshi has cast him in lead roles in nearly all his films, including Na Maloom Afraad, Actor in Law, and Load Wedding.

Word has it, Mustafa has been paying extra attention to his physique lately, specifically for his role. The shooting is to commence this December in Karachi, with some out-of-country shots as well. Which begs the question, who will take over the lead in Fat Man? Will Qureshi finally experiment with other actors or play it safe with Mustafa once again? Gotta wait and find out! Admin - November 29, 2016
0
Ali Zafar shines in Dear Zindagi as the film performs as a top weekend opener of 2016 at the global box office. Zafar plays the... 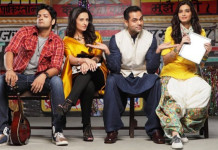