Bollywood singer Sonu Nigam made a special place in the hearts of fifth-grader Hadia Hashmi, Soch Band, and makers of ‘Bol Hu’ after sharing his emotions while listening to their Sufiana Kalam in a Facebook VLog.

A blissful last week for ‘Bol Hu’ team as they engaged with Nigam, firstly with Zulfiqar Jabbar Khan aka Xulfi getting a reply back from the Indian singer on a thanks-giving video message and later on Hadia joined Nigam via video link.

Taking to Instagram, Hadia revealed that her dream came true after Nigam joined him for a live session via video link.

She shared screenshots of the meeting and wrote: “We had the pleasure to have a Live Session with sir Sonu Nigam. And believe me, it was like a dream come true. It was great talking to you sir, thank you for your precious time. We really enjoyed it!”

It must be noted here that teary-eyed Nigam expressed his feelings after listening to soulful ‘Bol Hu’, sung by Hadia Hashmi and Soch Band.

“It’s been a while since anything has touched my soul like this, What a song, what lyrics, what composition! Wah! Soch band, kya Soch hai!” he was quoted saying. Admin - January 18, 2017
0
Academy Award Winner and the Co-Chair at 47th World Economic Forum Annual Meeting, Sharmeen Obaid-Chinoy will be featuring in an exclusive one-on-one session with... 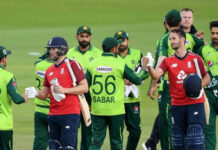