The HUM network and several celebrities have been facing criticism for hosting the HUM Awards during the severe climate crisis in Pakistan, but staying true to its commitment to using the platform of HUM Awards Canada for the flood affectees of Pakistan, HUM Network in collaboration with the artists’ fraternity, Momina & Duraid Foundation, and IDRF held a fundraising gala in Canada, to raise funds for the relief and rehabilitation efforts.

Apart from the artists who travelled for the HUM Awards, the gala night was supported by designers Shamsha Hashwani, Sana Safinaz, Nilofer Shahid, Faiza Samee, Rizwan Beyg, Sania Maskatiya, Wardha Saleem and cricketers Waseem Akram, Javed Miandad and Shahid Afridi, Babar Azam, Muhammad Rizwan, Shadab Khan, Shan Masood and Naseem Shah who provided their outfits and signed cricket bats respectively for the fundraising gala. All proceeds from tickets sales and auction of designers’ outfits, cricket bats and balls from the fundraising gala will go the relief and rehabilitation efforts in the flood affected regions of the country.

Check out some highlights of the event below. 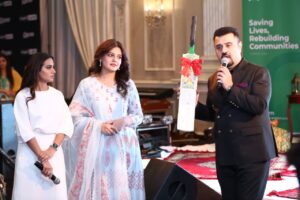 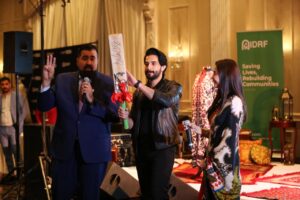 HUM Network believes in giving back to the society and has been at the forefront of providing relief to its fellow citizens by starting the HUMDard initiative in different regions of Sindh. Earlier, the network also arranged a telethon to raise funds for the flood affectees where all the employees of HUM Network donated their one-day salaries to the cause and has been dispatching relief packages on a regular basis to the flood affected areas of Sindh.

The recent floods across the country have caused devastation on an unimaginable scale and it will take years of hard work, dedication, and collective efforts to mitigate the socioeconomic implications of this overwhelming tragedy. In times such as these, we should all unite and offer collective help to the millions who have been affected by the devastating floods as the task is too big for any one person or organisation.