Famous drama series ‘Ertugrul Ghazi’ has become the talk of the town in Pakistan as it has been dubbed in Urdu and on-air on Pakistan Television (PTV)’s Youtube channel.

Following the increasing popularity of the Drama serial, which is based on Islamic history, celebrities have started talking about it on social media.

Abbasi also wrote good about the drama serial and made it an example of how to use this platform to spread good things.

Great example of how to use television to spread what is good. My beloved Rasool Allah SAW was indeed Rahmat al lil Alameen…. Allah’s mercy upon mankind. pic.twitter.com/urqIKLSCGG

Ali Safina is also watching the historic drama serial, meanwhile, he took to Twitter to know how many people are watching it too.

Just finished 2 eps of #Ertugrul on Netflix. What ep are you guys at?

On the other hand, Shan Shahid had opposed the idea of the Pakistani government to telecast ‘Ertugrul Ghazi’. He thinks that Pakistan should show its own history and heroes.

Try to find our own history and it’s hero’s .. Web Desk - July 10, 2021
0
The Drama serial Ishq Hai on ARY Digital suffered immense criticism for showing a forceful marriage proposal to a girl. According to the story, Minal... 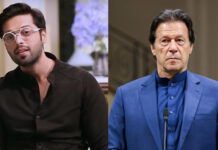