It is finally that time of the year when some of the best entertainers of the country will be awarded some prestigious civil awards. This Pakistan Day, the Federal Government has issued a list of 127 people who will be honoured at the Civil Awards ceremony.

The list includes a lot of honourable mentions, including some notable names from the entertainment industry who will be granted awards like Pride of Performance, Hilal-i-Imtiaz, Sitara-i-Imtiaz, Tamgha-i-Imtiaz, and such.

This year, Mehwish Hayat will be receiving the Tamgha-i-Imtiaz, for her performances in some of the biggest hits Pakistani cinema has to offer. Coming a long way from starring in TV dramas, Hayat has proved she is every bit worthy of every esteemed title she is granted.

Moreover, former Pakistani cricket team captains Wasim Akram and Waqar Younis will be awarded the Hilal-e-Imtiaz, for their contribution to the world of cricket and for helping the cricket team reach the high level it is at now.

Sitara-e-Imtiaz will be awarded to singer Sajjad Ali, Attaullah Khan Esakhelvi, current bowler in Pakistani cricket team Yasir Shah, and veteran actress Babra Sharif. All of these personalities have left a lasting impact in their respective fields, without a doubt.

It is invigorating to see local talent being awarded with some of the highest titles, and will only make aspiring actors and entertainers to strive harder for success in their respective fields. 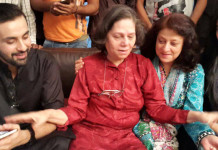