A girl in Khairpur allegedly set her own house on fire after family stopped her from making TikTok videos.

According to reports, the girl’s father, Aziz Ahmed Khilji lodged a First Information Report (FIR) for the incident alleging his daughter of setting their house on fire after they stopped her from making TikTok videos.

Meanwhile, the investigation officer confirmed that Khilji accused his daughter of alighting their house after being refused to make videos. “Khilji filed an FIR against his daughter in which he accused the girl of setting their home on fire after they stopped her from making TikTok videos,” he was quoted saying.

Later on, the police took action and arrested the girl who was then transferred to the women police station in the locality.

Earlier, Pakistan Telecommunication Authority (PTA) banned the online video sharing app due to several complaints from different sectors of society over its content. The app was restored in the country after TikTok’s management assured monitoring of the content on it. Farhan, Hania to pair up for drama serial Mere Humsafar

Web Desk - August 17, 2021
0
Farhan Saeed and Hania Amir will come together on tv for the first time with the drama serial 'Mere Humsafar' on ARY Digital. Written by... 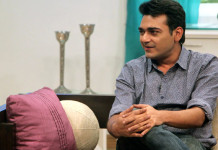 “It’s not true, media quoted her statement out of context,” Malala’s...