In the midst of all the controversies surrounding the Lux Style Awards nominations, actress Ushna Shah is a nominee that does not want to pay much heed to all the drama that comes with award shows. Bagging her first Best Tv Actress nomination for her performance in Balaa was not an easy feat, as apparent by her conversation with Dawn Images.

“This is my first LSA nomination and I am very grateful for it. While I was working on Balaa, I hadn’t really given it much thought as I was completely focused on the character that I was playing,” she said, while thoroughly appreciating the positive response the show garnered.

Speaking about the challenging aspects of the role, the actress felt that the scorching heat and her personal health issues added to the inconvenience. “It was really difficult as we were shooting in May-June during Ramazan and I had just got a dental surgery done and couldn’t take painkillers while working as I was fasting,” she said.

“Being away from family, carrying a hot, heavy wig in sweltering heat and being in physical pain was all kinds of challenging and I channelled that physical pain into the character. It helped me play Nigaar. Other than that, it was a great experience,” she added.

Moving forward, her take on the current LSA controversies was mainly something that isn’t worth her time. “I do not like to focus solely on the reliability of awards because I have had work that has been appreciated, but I have also had work that I was expecting to be appreciated for but it wasn’t liked by the people,” she said.

“This is not something that I rather give too much thought to because I feel it deters my creativity and that is something that I don’t want to compromise on at all. As much as I appreciate and like awards, I try not to be validated by them. I have won awards when I wasn’t expecting anything so I just want to focus on my work and see where the road leads me to,” she added. Arsalan Ali - September 20, 2017
0
Our society stresses a lot on children's growth and development but ignores a very important factor i.e our behaviour towards them. They follow and... 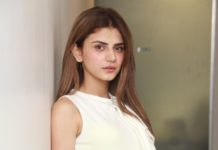