Global Heartthrob. Bradford boy. Reluctant role model. These are some of the words used by British Vogue (BV) this month to describe this 25-year-old mini-mogul, and rightfully so, Zayn Malik. The former One Directioner sat down with BV to shed light on some things he has been tight-lipped about, provoking amusing reactions from the fans.

Ever since his bubbling teens, Pakistanis hold a soft spot for him because of his Muslim background, and for his roots nesting in Pakistan. Apart from speaking about his relationship with his former bandmates, and current girlfriend Gigi Hadid, Malik illustrated his religious views, which did not sit well with a significant part of the Muslim community.

An excerpt from the interview has been making rounds on the web, where the Pillow Talk singer declares, “To be honest, I’ve never spoken publicly about what my religious beliefs are. I’m not professed to be a Muslim.” When asked hard-hitting questions like would he call himself a Muslim now, he announced, “No, I wouldn’t.” Furthermore, he added how he just wants to keep his faith between himself and whatever he believes in, and that if he behaves well, he will get treated well. “There are definitely beautiful parts to every religion,” he said, adding that he was pleased to have built his life around tenets of Islam.

Zayn’s religious notions have garnered all kinds of wild responses from his massive fan following. Some downright cancelled him for coming out on a different path. Coming in with the hate left, right, and centre! Amongst the rage and the dejection, some really saw it coming for a long time and were surprised at people being shocked. 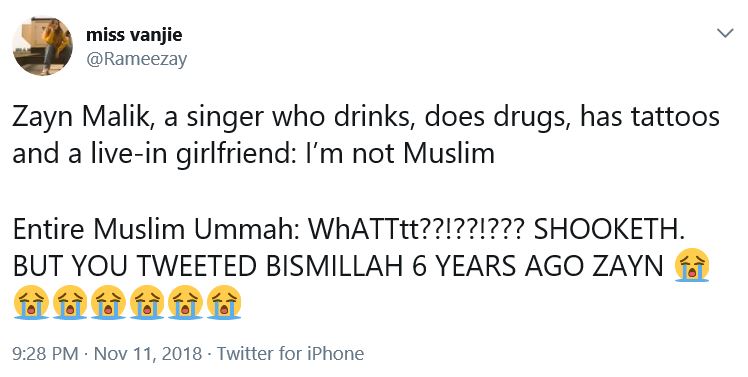 Mixed feedback all over, some deemed it necessary to point out how personal matters like these shouldn’t be speculated. Earlier this year, fans were delighted to see pictures of Malik celebrating Eid with his girlfriend, so this revelation might have come across as a shock to some. At the end of the day, the idol still believes his religion does not define him just like it should not define anyone else. We’d love to hear your thoughts on this affair!