There are many ideas that the older generations and parents disagree with our generation on; uncountable factors and habits that they like to point out and shake their heads with disappointment in their eyes. Be it the fact that we are obsessed with capturing every moment of our lives in cameras (God, those darn selfies!) or that we are more social on social media than we are in our actual lives. They disapprove more or less all of our life choices; from our clothing to our lifestyle and the way we are wasting resources (because, of course, they are not the ones responsible for driving planet Earth over to the edge).

They are worried about the offspring we’re going to be raising. There are jokes about how our children would be crying and we’d tell them to be quiet, because all that noise is getting in the way of us taking the perfect selfie, and that they will learn how to use technology before they are able to take their first breath in the real world. Our obsessions and choices today are going to ruin the future generations, is basically what they believe. And they know better. Because, hey! They come from experience.

Honestly? They’re not wrong in assuming that we are going to be bad parents. However, the fact that they talk about all the ways that we’re flawed while ignoring possibly the biggest reason that so many of us are the way we are, is truly sad.

What I’m referring to here is considered to be a taboo in our society. And we might never really find out why. It is understandable that our religious and cultural values require a certain amount of privacy and haya when it comes to such matters, no offence to those. But why discussing and taking action against menaces such as sexual abuse and rape are frowned upon is a mystery that we may always fail to solve.

The fact that many individuals have been sexually abused as children or as young adults is baffling. According to a report published by the organization “Sahil”, there were a total number of over 2,000 cases of child sexual abuse that were reported by newspapers in 2016 (January – June). The report also stated that the number had only increased from 2015. And these are all cases that have been reported. These are children who have dared to speak up and the year is 2016. Things weren’t quite the same for the 90’s children.

But let us not go too deep into the statistics. Let me share just a few real life stories of *individuals who are in their late teens or early twenties today, and are anticipated to become parents soon enough (Because, in Pakistan, there is a certain age by which it is socially acceptable to get married and have children):

How can we expect her to become a good mother one day; a girl who was raped by her sister’s fiancé, because he “didn’t like her attitude”? She did not ask for him to see her as a piece of meat to devour. She wasn’t given the choice over her own body then, and she wouldn’t be given a choice over it when she is forced to have a child she is not fit (mentally or emotionally) to nurture.

How can she ever raise strong, trusting individuals; a girl who cannot trust any man because her aunt’s husband took his frustration out on her back when she thought the only difference between a man and a woman was their clothes? She still has to see that man at every family gathering, and she cannot say a word. She screams internally, dies, every time she has to say salaam to him with a smile on her face as if nothing has ever happened.

Can we really expect him to not be mentally scarred; a boy who had to lie still as his cousin invaded his privacy late at night as he pretended to be asleep because he was too scared to confront him? He has never spoken up about it, and the truth gnaws at him every single day. Yet he is supposed to be a good father to his children when he, himself is merely a scared little child who was wronged by someone he once saw as an older brother.

Is her fear of intimacy with any and every human being not justified; the girl who was made to play games no seven year old should be playing because some Aslam bhai* from her neighborhood couldn’t find a girl his own age to have a little fun with? How can she be expected to let another person into her personal space when even the slightest of touch reminds her of the cruel man who took her innocence away from her?

Even today, children are not being treated as children. It doesn’t matter if they are six or sixteen; their bodies are treated poorly because a couple of thirsty people cannot “keep it in their pants”. It’s harsh, but it’s the reality.

Why is it becoming a norm, of sorts, to force children to grow up way before they are meant to? Why do we live in a society where it is counted as a miracle that a six year old survived after being raped and thrown away to die? Why does nobody look at the fact that a six year old should not have had to go through something like that in the first place? Who makes it acceptable for all the people in power to sleep peacefully at night when hundreds and thousands of children are being violated abused right under their noses?

It is not natural for the society to expect individuals suffering from numerous mental ills caused by cruel adults in their lives to raise happy and healthy children; it’s merely wishful thinking. The kind of harm that has been done is far from something that can just go away with time or can be fixed without being discussed or dealt with. The elders are not wrong. We truly are going to become a generation of damaged parents.

*The names of the individuals who shared their stories with us have not been revealed in order to protect their privacy. Sadly, knowing their stories will only make the society judge them based on their past and that would not help their cases. Admin - May 28, 2019
0
Despite putting forward a phenomenal performance as Chammi in Aangan, Sajal Aly is definitely being missed on the silver screen. The starlet who made... 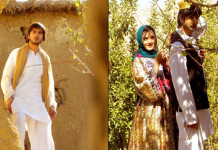