Along with an array of films releasing soon, the Pakistani entertainment industry has something else to look forward to first. The annual LUX Style Awards are set to present in all its grandiose in a couple of days, despite all the drama and controversies surrounding it.

Without a doubt, the night will be full of glitz and glamour, tense moments, and whole lotta celebrations. And we’ve got the lowdown on what exactly is going down that night! Read on to find out which of your favourite stars will be setting the stage on fire, and which ones are booked for presenting awards and hosting some killer segments.

1. Fahad Mustafa and Mehwish Hayat will perform on three songs

The Load Wedding duo is all geared up to perform on not just one but three tracks, namely Billo Hai, Munday Lahore Dey and Good Luck. This will be the first time Mustafa will take over the LSA stage, rehearsals for which have been going on in full swing. This year’s LSAs will mark Aslam’s return as a performer after two years, and he has two songs in line to perform – Thaam Lo and Mujhey Dil Se Na Bhulana.

Reeling from the praise her performance in Baaji is getting, Meera will be doing a dance number with Asad Siddiqui. An interesting pairing, if we must add. 4. Zara Noor Abbas will host a segment with Mehwish Hayat

Speaking of Asad Siddiqui, his better half Zara Noor Abbas is also joining the bandwagon. The actress will be hosting a segment with her Challawa co-star, Mehwish Hayat.

5. Hira Mani has refused to present an award

Unfortunately for Hira Mani fans, the actress has refused to present an award at the ceremony. The reason behind her refusal is unknown, but it could be a step taken as a result of no nomination, or because of no proper compensation. 6. Mahira Khan will only be presenting an award, not performing

Looks like Mahira Khan fans might be in for a let-down, as many were looking forward to seeing her set the stage on fire. However, the Superstar actress will only be presenting an award this year.

LUX’s very own Maya Ali is all set to perform as well, on the song Chitti Zara. The Parey Hut Love starlet has got everyone excited, as pictures from their rehearsals have been making rounds all over social media. 8. Shabnam will be getting the Life Achievement award

This year’s Life Achievement award will be presented to Pakistan’s renowned film and stage actress, Shabnam, who has remained the light of Lollywood from the 60s to 80s.

9. Saba Qamar will be performing on Mera Babu Cheen Chabeela

Saba Qamar has always been vocal about her disdain towards LSA, so it came off as quite a surprise for many when she emerged as the new official LUX lady. And to add to it, the Cheekh actress will also be performing on Mera Babu Cheen Chabeela! 10. Mansha Pasha and Ahmed Ali Akbar will be hosting a segment

The hosting will not be restricted to a few people this time around. The hottest duos from recent films will be hosting segments together, which includes Laal Kabootar’s Mansha Pasha and Ahmed Ali Akbar.

11. Maya Ali and Sheheryar Munawar will be hosting a segment

And the Parey Hut Love leads aren’t far behind either!

For the first time, Momina Mustehsan will be performing on the LSA stage, and she has deemed it a special performance for a number of reasons. According to the singer, the main gist of her performance will focus on resilience and women empowerment. And better yet, the entire performance has been composed, produced and conceptualised by Mustehsan herself! 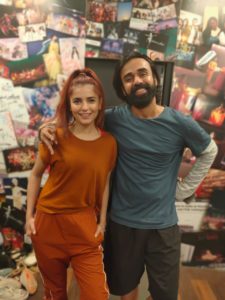 13. Hareem Farooq will not be promoting Heer Maan Ja

This could’ve been the night for Hareem Farooq to promote her upcoming film Heer Maan Ja, but the actress has decided against it and will possibly not show up as well. The actress did not outright boycott the ceremony like others, but is probably showing her support for the women who did, this way.

14. The celebrities who won’t be attending the ceremony

And speaking of celebrities who won’t be attending, there are some prominent figures in there. According to sources, Ahad Raza Mir, Sajal Aly, Urwa Hocane, Mawra Hocane, Farhan Saeed, and Bilal Abbas Khan have chosen not to grace the ceremony with their presence.

15. Ali Zafar will not be presenting an award, nor performing

And we finally come to the person who has left everyone wondering whether he will show up or not. This year, Ali Zafar will not be performing nor presenting an award. His presence at the awards is still doubtful, as the controversies surrounding LSA stemmed from his harassment case with Meesha Shafi. And LSAs will probably try their best to play it safe in this regard.

Well, there you have it, the exclusive inside scoop on one of the biggest nights of Pakistani entertainment! P.S Now’s the time to start placing your bets on who you think would score, and who’s going to go home empty-handed. Regardless, the event has more to offer than just wins and losses, and we’re here for it. Admin - April 16, 2017
0
The latest offering from The Fast and Furious Franchise, F8 has become the highest opening day grosser in Pakistan for 2017. The film which has...