Indubitably, Prime Minister Imran Khan’s speech at the United Nations General Assembly (UNGA) was groundbreaking in all aspects. Not only did the PM started trending nationwide, but it was also the topmost trending topic in several countries globally. He made sure his the spotlight remained on Kashmir, and urged the UN to take strict action if a bloodbath is not on their agenda.

His words created a stir in the general public and celebrities alike, as many took to Twitter to express their appreciation for the leader. Actors like Humayun Saeed, Mahira Khan, Mehwish Hayat, Hamza Ali Abbasi and many more lauded his brave standpoints and expressed how proud they felt to have a leader like him.

Prime Minister Imran Khan packs a powerful punch with his eloquent speech and tremendous passion. As a truly dynamic leader, he gets the message across loud and clear. So proud of him! #UNGA2019 pic.twitter.com/n9jlZ6LbzK

Thankful to Allah for blessing us with PM Imran Khan who today proved that he is not just a leader of Pakistan & Kashmir but a Leader for all Muslims & one of the biggest voices of Humanity & Islam. May Allah protect him. #UNGA2019#IKFinalTalkForKashmir #ImranKhanVoiceOfKashmir

This is the stuff leader's are made of. A heartfelt, sensitive, well backed and impassioned plea for #HumanRights and awareness by our PM @ImranKhanPTI to the United Nations General Assembly.@PTIofficial.

Actress Mansha Pasha also wrote an entire thread highlighting the importance of the speech and how he nailed all those points.

Great speech at #unga by the PM! Honestly even tho a lot of what was said is considered an honest truth by most Muslims, it was so liberating to hear it said out loud on a global forum. And that too, so articulately mashAllah. I hope and pray the world pays attention for many

Farhan Saeed expressed how proud he felt to have voted for him.

While Armeena Khan made sure the trolls knew their place.

No one has ever represented not only Pakistan but 1.3billion Muslims the way PM @ImranKhanPTI did today during his speech at #UNGA2019 A true leader spoke 2day who has the right to represent Muslim world.May Allah protect him and make him achieve what he is willing for Humanity

Safe to say, the PM has set the standards pretty high for others to come. 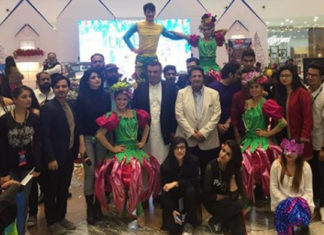 Admin - January 20, 2018
0
The new year has come with a gush of worth cherishing surprises and festivities. But, while everyone was glued to planning new year resolution...