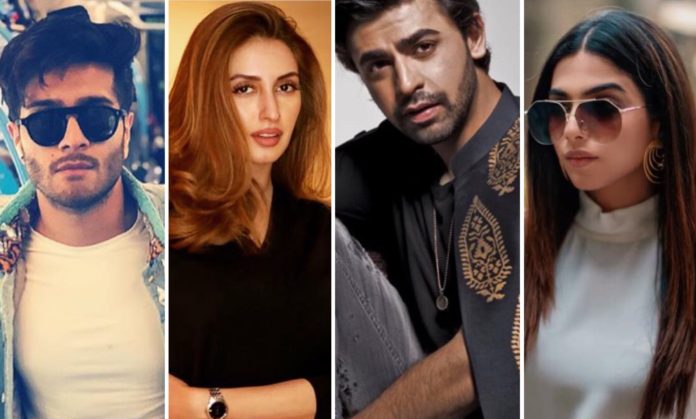 Urwa Hocane and Farhan Saeed may not be starring alongside each other for a hot minute, but they are fully geared up to bring something even more exciting to the big screen. Their joint venture, a film studio called Shooting Star Studio, has got them working on their upcoming film, titled Tich Button. Interestingly, it will have Hocane in the producer’s hotseat for the first time.

Last week, it was established that Saeed will be making his big screen debut with this film and playing the main lead. And now, the film’s team has revealed the rest of their stellar cast. Rest assured, the film is featuring some of the industry’s rising favourites, like Feroze Khan and Sonya Hussyn, in prominent roles. It will also feature Iman Ali in a pivotal character, which will mark her long-awaited return to films after 2015’s Mah-e-Mir.

More details about the project are still being kept under wraps, but the motion poster gives a glimpse of something fun and light-hearted. Hocane also depicted that the film will be an entertainer for the whole family, and the audience should look forward to a lot of love, friendship, and fun. The film will be directed by Qasim Ali Mureed, and will be co-produced by ARY Films and Salman Iqbal Films.

Hocane also confirmed that the Director of Photography will be Salman Razzak, who has previously worked wonders on Punjab Nahi Jaungi and Jawani Phir Nahi Ani 2. Fans are also eagerly hoping for a cameo from the Rangreza starlet herself, but let’s see if it stands true.

Read: Mahira Khan the triple-threat – now has three feature films lined up for 2019

No official release date has been announced yet, but keep your eyes peeled for a release around Eid this year. Arsalan Ali - November 3, 2017
0
Fahad Mustafa started acting on television and became one of the top most actors in the drama industry of Pakistan. Then he started hosting...