In a detailed social media post that was put up last night, Mohsin Abbas Haider’s wife Fatima Sohail accused the singer-actor of cheating on her and physically abusing her while she was pregnant. Attaching pictures of her bruised face and hand, his wife opened up about all the details regarding their relationship, concluding with how she has lodged an FIR against him.

“On 26th Nov 2018, I caught my husband cheating. When I confronted him, instead of being embarrassed he started beating me. I was pregnant at that time!” she wrote. “He pulled me from hair, dragged me on the floor, kicked me several times, punched me on face & threw me on the wall,” she added.

His wife has also claimed that the actor cheated on her with model-actress Nazish Jehangir. And that he opened up about his mental health on social media as a sympathy tactic.

Haider is yet to confront all these allegations. In the meantime, celebrities have started to weigh in on the situation, mostly siding with his wife. Eyewitnesses have started speaking up on the matter, which include Dua Malik and Gohar Rasheed.

#JustIn: After the news about #MohsinAbbasHaider being a domestic abuser broke last night, actress #DuaMalik has now come forward claiming to be a witness to the situation in the past where Mohsin had beaten his wife! Shocking! @duamalik

#GoharRasheed reveals that #FatimaSohail, wife of #MohsinAbbasHaider is like a sister to him and he has been a personal witness to the abuse she has borne at the hands of her husband. – via @mirzagoharrasheed

I've been staring at this screen, grappling with the images I saw, trying to form a coherent sentence.
…
There is a special place in hell reserved for anyone who would lay so much as a finger on a woman.
You cannot justify abuse.
It is indefensible.
I am sick to my stomach.

Hania Aamir also took to Twitter to state how all the hard work isn’t worth it if you’re partaking in such acts.

You know all the fame you get, all the hard work you put into your work, that body you keep working on, those sleepless nights of shooting and working hard don’t pay off when you’re a piece of shit! #TimesUp pic.twitter.com/phRxQpPnYg

Mahira Khan also talked about how this behaviour is normalised in our society and needs to be stopped.

Sick to my stomach. What gives anybody the right to raise their hand on anyone? Nothing. No excuse.
For eons now we have normalised abuse (of all kinds) and for the sake of our children this needs to stop.

#UshnaShah may have been a friend to #MohsinAbbasHaider, but is now there to back his wife #FatemaSohail who shared her traumatic domestic abuse story on social media. @ushnashah

Mansha Pasha also sent out a PSA to all men saying there is no excuse for abuse.

Dear men,
Before you even think abt hitting your women, JUST DONT.
There is no excuse, no validation, nothing u can offer that in ANY way makes this okay.
We are stronger than we look & we will fight back.
Silence is not, was not & never will be an option.

Even Komal Rizvi weighed in on it in detail, revealing how she herself has been a victim of such and strongly condemns this act and anyone who would support Haider if the allegations are true.

So so disappointed! Domestic Violence/ Physical Abuse is a Sin and a Crime . Sharam Aani Chaiye

Growing up I remember, once my father got really upset when he saw my mother crying. Upon inquiring, he found out that one of our neighbor used to beat his wife. He went up to his house the same day and put him in his place. The guy was a wuss. #MohsinAbbasHaider shame on you!

Asim Azhar put a strong case out of how everyone should collectively boycott ‘toxic beings’ as such, instead of questioning the victim.

I can’t begin to stress enough on this issue. This is just one story. Firstly, thank you Fatema – for getting the courage & coming out with your story for all the girls suffering from the same issue. Countless women are silenced by monsters like these, physically & mentally. 1/2

We, as a society, need to cancel & boycott all these toxic beings. Do not give them any publicity at all in any circumstances. No more proofs needed, no more ‘wait for his side of the story’. Because domestic violence is NOT okay in response of ANY action. #TimesUp 2/2

I am shocked to see that instead of supporting the suppressed, so many of us are waiting & wanting to hear ‘the other side of the story’ – how can ANYTHING possibly justify physical abuse?! Unbelievable.

You guys might not know the ‘other side of the story’ but sadly some of us do. So wait all you want to hear your beloved response. But I will not stand people like these in the society & the least I can do is speak up.

Usman Mukhtar also encouraged other men to stand in support of women who deal with domestic abuse and to stop it at any chance they get. Moreover, people all over social media have collectively stood in support of Haider’s wife, and do not believe there can be another side of the story.

Mohsin abbas haider is also cancelled. All men are cancelled.

I hope Mohsin Abbas Haider’s wife drag his ass to jail. May he get beaten like the way he beat her, or even worse.

HE HAS BEATEN HIS WIFE, WHAT OTHER SIDE? IF YOU THINK THERE IS AN OTHER SIDE OF THE STORY AND WAITING FOR IT THEN YOU ARE A CHUTIYA TOO LIKE HIM AND PLEASE UNFOLLOW ME RFN. NOTHING CAN JUSTIFY IT.

man: this woman cheated on me

woman: my husband beat me while i was pregnant

pakistani men: nEEd tO hEAr OThEr sIDe of StoRY

What’s the other side of the story of a man cheating on and beating up his pregnant wife?

Its breaking my heart that Mohsin's wife had to display her scars to prove the legitimacy of her claims otherwise she would've been labelled as a 'dramaybaaz' etc.

Many are waiting for fellow entertainers of the industry to side with Haider on this.

Aur bhai , ab kaunsa chutiya celebrity kehne wala hai 'i hAvE aLwAys wOrKed wIth MoHsIn AbBas aNd hE hAs NeVer bEaTen Me'

It was also pointed out how his wife had been sharing subtle signs of a strained relationship for quite some time now.

Went through her profile and man she has shared so many posts which can be taken as a hint that mohsin was cheating on her.

Many have been incredibly vocal about their antipathy towards Haider.

Mohsin abbas haider is an example on how you can act like a saint, throw around your fake depression but can be an complete utter asshole, who 1) cannot support is own child 2) move towards domestic abuse 3) abuse his wife while she’s bearing a child. You’re a fucking loser.

When Mohsin Abbas posted about doing a suicide, i sent him ig dms regularly sending him love and support. Ghin aarahi hai ab

And while many are also encouraging fellow celebrities to not stay silent regarding this matter.

If Mohsin Abbas still gets to work in film/tv after this and his costars especially the leading male/female actors in his projects don't publicly distance themselves from this monster and demand his explusion then they too deserve to be called out and shamed for their silence.

Benefit of doubt only exists for men.

Haider will apparently address these allegations in a press conference. He has also taken up the top three trends out of four on Twitter. Meanwhile, watch this space for all the updates. 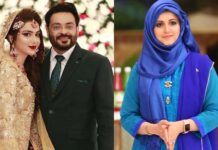